A freelance writer and author

View my Portfolio
You are here: Home / General / My friend, the out-lympian 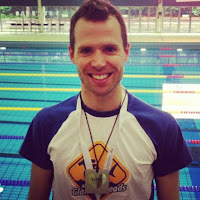 An impeccably chiseled and taut young man takes his mark, a deep breath, and dives. Thousands of fellow athletes and supporters look on, taking part in this international event of Olympic proportions… with a twist. They are in Antwerp, Belgium, celebrating their sexuality. Ladies, gentleman and miscellaneous, welcome to the World Outgames.

This gorgeous specimen that I am fortunate enough to call a good friend (and thus mercilessly objectify) met me for our weekly coffee. A state champion during high school, last year Kirk Goodsell revived his passion and talent in the pool as a member of Melbourne-based gay swim club, the Glamourhead Sharks. In addition to churning out world-class swimmers, the club provides a social and support network for its members. Kirk was fortunate to find them during a period of change. ‘I was getting ready for the next chapter of my life’ he reflects. ‘I was reaching out to meet new people and make new friends.’

Having just departed a long-term relationship, the club helped in redefining his identity, and he isn’t alone in benefiting. ‘We recently had a person join us who has just left a twenty-year marriage with children,’ he tells me. ‘A lot of people come to us because they don’t have any gay friends. It’s a place to meet people and get support.’

And swim, relentlessly. After months of extensive training, protein shakes, physio appointments and heat packs, Kirk flew to Belgium alongside ten of his Glamourhead comrades. I am curious about these World Outgames… do you have to declare your sexual preference on entering? ‘No’, he says. Makes sense, the event promotes harmony and integration. ‘The games are open to anyone, but like the Mardi Gras, they are run by a gay and lesbian organisation.’ On behalf of my sexuality, I ask if there was much of a ‘straight’ presence at the games. ‘Not amongst the competitors’, he says, ‘but definitely in the supporters and locals from Belgium that came to watch.’ Very good. Previously unbeknownst to me there are numerous events like this taking place around the globe, including the Gay Games and the Asia Pacific Outgames.

Spanning twelve days and attracting five thousand athletes in thirty-two sports, the World Outgames are no small affair. Humble as ever, Kirk claims to have done ‘quite well’ in the three days of swimming events. The man walked away with no less than FIVE gold medals. And outside of the pool? Was there partying? Scandal? Currently enjoying a committed relationship, Kirk was not directly involved in the ‘hook-ups with people from other teams and countries’ but assures me that intermingling occurred, as one would expect from any half-decent Olympic village.

As a citizen of, for the most part, a gay-friendly country, I can’t help but question the need for segregated events such as this. Kirk stresses that there’s still a long way to go, and ‘not just in Australia with gay marriage.’

‘While it might not be a huge thing for me to go from Australia to Belgium, where I can walk down the street and hold my partners hand, there were some people there from Russia who had to enter under false names.’

This harrowing reality was especially apparent during the opening ceremony. ‘It was filmed’, he says, ‘but when Russia walked on stage they had to turn off the cameras so that no faces were shown. You could just tell for them, being there was such a scary, but embracing experience.’ Stories such as this left him all the more determined to push for change, reminding me that ‘it’s our job as Australians to lead the way and inspire them to keep fighting so that one day, they can achieve equality.’

It most certainly is. And to make things a bit easier, the third Asia Pacific Outgames are being held in Darwin this coming May. The Glamourheads plan to send a sizable team, and I encourage others to go along and support this absolutely… fabulous event!